Finding cheap domestic flights in Canada doesn’t have to feel overwhelming. Book your domestic airline tickets today with us and begin a new Canadian journey.

Canada is the second largest country in the world in terms of land mass, with vibrant cities spread across the 10 provinces of Canada and 3 territories. Unlike many other countries in the world Canada enjoys some of the best air connectivity between all the major cities in Canada. Due to high competition between the domestic airlines in Canada and the International carriers have resulted in developing a price war between the same. Domestic airlines in Canada are well known across the world for their service, hence people living in Canada prefer Canadian airlines over International ones.

Low cost carriers offer domestic flight Canada at an affordable rate, ensuring that people of all income strata can take yearly vacation. People looking for Cheap domestic flights Canada can easily use our website BookOtrip to find some of the cheapest flight ticket deals available out there. Planning your travel is a very important part in ensuring that you get the cheap airline tickets deal. If you could plan the trip way in advance before the actual vacation and book according, you have a better chance of ensuring a low price for your ticket. Some airlines offer certain festival discounts, or fire sales, tracking them can end up costing you very less.

1. Subscribe to BookOtrip email alert program to get updated about all the latest discount sale offers introduced by the airlines.

2. Choose off-peak hours like late nights or early mornings to fly, to get cheap domestic flights. This trick usually works in most cases.

3. Download BookOtrip app to get the up to date deals on the go.

Canada with its 10 provinces and 3 territories have some of the largest cities in the world. Canadian capital Ottawa has one of the busiest airports in Canada. Toronto, Canada’s biggest city with a population of 3 million has a huge immigrant population, making Toronto Pearson International Airport one of the busiest airports in the world. The second most populous city in Canada in Montreal, in the Quebec city is considered by many as the most beautiful city in Canada, a popular destination for domestic tourists in Canada. Calgary is considered the oil capital of Canada, a vibrant city that attracts workers from across the world. 10 popular domestic location in Canada are as follows:

1. When is the best time to book cheap domestic flights?

There is no special time to book cheap domestic flights, but you get cheap air flights if they are generally booked 2-3 months prior to the journey.

2. Is it cheaper to buy domestic flights at the airport?

No, it's not a good idea to buy flight tickets directly from the airport. It is usually a pricer option.

3. Is it possible to transfer the ticket booked for domestic flights to someone else’s name?

No, you can’t transfer your air tickets to anyone else.

4. How can the payment of E-ticket for domestic flights be made?

The payment of E-ticket for domestic flights can be made via debit card, credit card or net banking.

5. How much luggage can I carry while traveling Domestic in Canada?

There is no standard luggage allowance scheme in place for domestic flights across Canada. You could ask our 24/7 customer service experts to know more about the same. 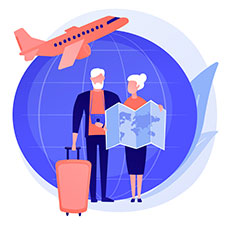